Where is this nest? 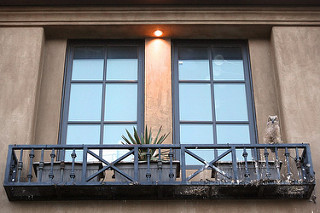 The nest is in a fiberglass planter box atop an iron planter ledge under upper story windows of the front our home in NW Oklahoma City. It is one of three planter boxes on the ledge, all of which are approximately 12” deep, by 12” tall, and 24” wide. They are filled with an organic mix of vermiculite, peat moss, and mushroom compost. This mix was chosen both for good growing conditions, as well as a healthy, chemical-free soil for the owls.

How many years has she nested here?

The Tiger Family has “brooded,” or laid on the eggs, since 2011. However, the original Mrs. Tiger has laid eggs here since prior to 2010, not brooding the first 2 years. We believe this is due to possibly not having been mature enough at that point.

We can’t know for certain, but based on what we’ve observed, we are certain they are at least seven years old. Mrs. Tiger has laid eggs 6 times at our house. The first two times, she did not brood (incubate) them. We believe it’s possible that she was not yet mature enough to brood eggs. However, we know that GHOs typically aren’t able to lay eggs until at least a year old. So assuming she hasn’t laid any prior eggs before she laid them at our house, she would have been at least one when she laid the first eggs, and has done so six consecutive years here, making her at least seven years old. We would assume Mr. Tiger is of similar age, though there’s no way to confirm that.

How long does it usually take for GHO eggs to hatch?

The average incubation period for GHO eggs is 33 days. This puts the first egg’s likely hatch +/- Feb 5th. Eggs hatch asynchronously, and thus will likely hatch in order they were laid.

Where do they get their food?

There is a golf course in the neighborhood, so there is plenty of open space and natural terrain full of small animals. There is also a large commercial parcel of property a few hundred yards from our home where rodents and rabbits tend to flourish. Hunting is taken care of by Mr. Tiger, who will often deliver the food directly to Mrs. Tiger on the nest during brooding, who will usually leave the nest briefly to eat. Just prior to hatching, Mr. Tiger will bring additional food to build the “pantry”, which is a stockpile of food for Mrs. Tiger to use to immediately begin feeding the new owlets upon hatch. As the owlets grow, Mr. Tiger will increase his frequency of delivery, and eventually Mrs. Tiger will join him on nightly hunts as food demand increases. Food delivery is always at night, though feeding of the owlets can take place throughout the day with food from the pantry.

Why would they choose to nest here?

We can never know for sure, but observation has led many to conclude this is, albeit an unlikely, but very strategic choice for a nest location. It is atypical in that it is an urbanized setting, surrounded by human activity ranging from kids playing outside just feet away, to normal neighborhood traffic. However, the nest enjoys nearly 60% shelter, as it rests inside an in-set window box protected both by the wall of the house and the eve of the roof just above it. The color of the house provides potential camouflage very similar in color to their markings. From a strategic standpoint, it is almost fully protected from the predators they are up against in a typical nesting site. No roaming animals could access the nest, leaving it open only to other larger birds of prey, or the occasional curious human landlord.

Doesn’t the light at night bother her?

The house is well-lit at night, and just over the nest is an 8w LED-based recessed can light under the eave. It is not as bright as it appears, as the camera settings and settings in the streaming software are adjusted to extreme levels at night for optimal view of the owls. The owls spend lots of time on our cul-de-sac in the late Summer and Fall during their courting phase. They are not only very aware of the lighting around the house, but they have numerous other options close by that do not have light. Given this is the 5th year Mrs. T has chosen to lay eggs here, it’s apparent that the light is of little concern to her, and behavior suggests that both she and Mr. T are normalized to it.

Can she see in the window?

No. The window is screened on the inside by blackout curtains and window draperies, so any rare activity within the room goes relatively unnoticed by her. She sits in the nest about a foot below the bottom of the glass. Often when it appears that she is looking up into the window, we've come to realize that she is using the window to see in its reflection behind her. There have been numerous examples of when she has become alert, looked at the window and traced movement that was proven to be Mr. T's reflection as he arrived.

Do you use the room adjacent to the nest?

The room just inside the windows over her nest is what we call “The Theater Room.” When the Tigers aren’t actively nesting here, it’s where the occasional family movie night is held, where sporting events are viewed, and where Deziray often exercises. Since it’s not an essential room, while the Tiger Family is nesting, we restrict access to it, limiting it to only essential trips to the tech closet to reboot the camera server, or, if Mrs. Tiger is off the nest, Alessondra and Giavauna can come up to catch a close-up, real-life view of the nest.

What is the deep "whoosh" sound and the steam that sometimes is viewable in the camera?

That is the concentric vent that is below the planter ledge that ventilates the house's boiler. It is not vaporous, and is usually only visible when it's cold enough outside to generate steam when it's being ventilated.

Do you do anything to help prevent owlets from falling off the ledge, like putting up a net? 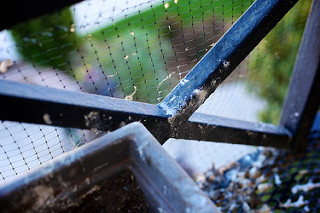 In Season 2, it appeared necessary to install a thin, bird-friendly netting tightly around the outside of the iron ledge to prevent any accidental falls between the balusters. After a risky job installing it under the ire of protective parents, it proved to be needless. The owlets didn't roam outside of the pot until they were agile enough and too big to easily fit through any gaps. Once they were mature enough to "rail" (walk along the top rail of the ledge), they often snagged their talons in the netting, and once even becoming entangled. The netting also tended to amass their defecation, which Jeff wasn't cool with.

How does this experience affect your family?

There are plenty of pros and cons to this experience, but the pros overwhelmingly outnumber the cons. The positive aspects of it begin with the amazing and unique experience that was first thought of as an educational experience for our daughters, but quickly turned into one for us, and millions of other people. We have “met” thousands of people through chat, and made dozens of new close friends. The community that as developed through this experience is perhaps the most rewarding part of it.

The challenges include preserving as much of an undisturbed environment for the Tiger Family as best we can despite all of the opinions expressed about what we should or shouldn’t be doing. We do everything we can to do what’s best for the owls within reason, and do so according to the guidance we receive from experts we have access to. A few other challenges include paying almost constant attention to the cameras and stream to insure it stays up and provides an optimal view, keeping everyone up to date via the stream page, Facebook page, and Twitter feed, having to restrict access to the room of the house where the nest is, the increased traffic of interested visitors who drive by our house to catch a glimpse of the owls, and trying to live an otherwise normal, busy life amidst all of this.

How do you include the weather data in the stream, and where do you get the data?

See our information about The Tech behind the OKCOwlCam.