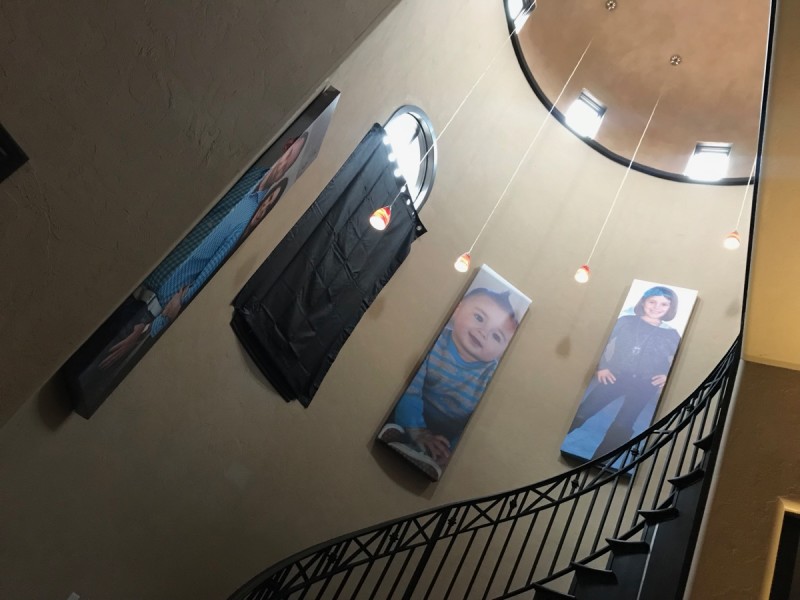 The temporary curtain added to the staircase window.
Nest Effects
Posted by OKCOwlCam / Jeff Click   —   02/16/2019
We routinely get asked, “Why don’t you do this…?”, or get told, “You should do that…” to somehow protect the owls from the surroundings they chose as their nest site. It’s been our policy from day one to merely be observers and invite you along.
Read the full story 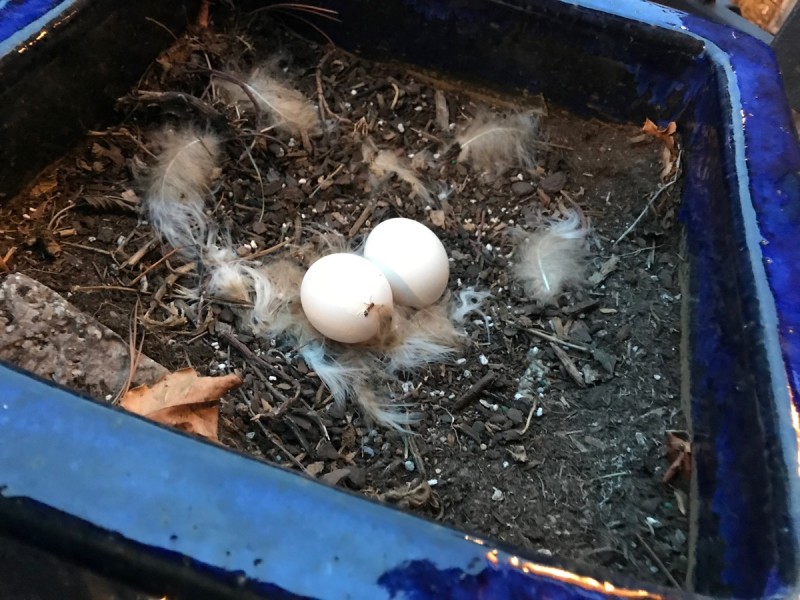 E7.1 & E7.2
Like Clockwork
Posted by OKCOwlCam / Jeff Click   —   02/15/2019
Altera came through like clockwork, laying E7.2 some time between 3:45-6:00AM this morning. Thursday OKC enjoyed temps in the 70s, but dropped into the upper 20s overnight with the outlook over the next week hovering around freezing. Consequently, Altera remains on the nest, which is an encouraging sign.
Read the full story 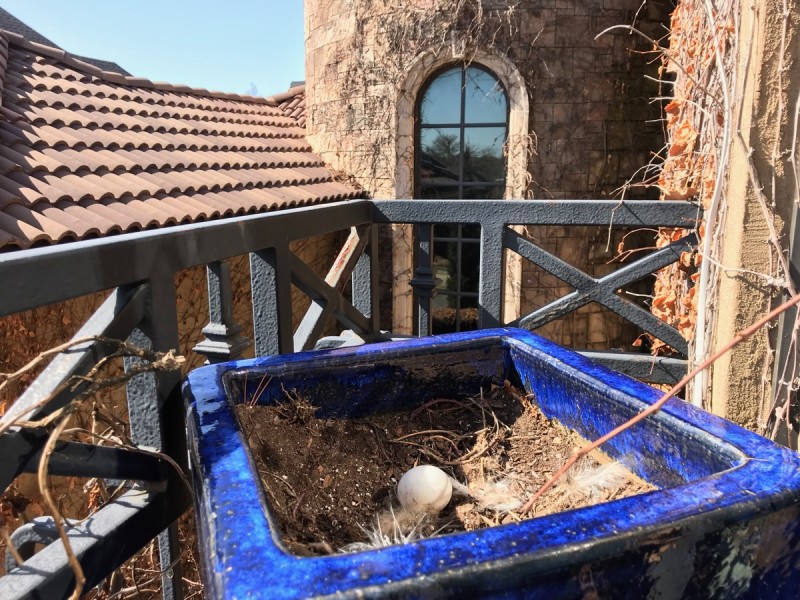 On the morning of 2/12, Deziray discovered Altera in an urn on one of the Juliet balconies. Similar to Season 1, when it all started, the chosen nesting site is a tall, ceramic urn, but this time on the south side of the front entry. (Season 1 was on the east side). “E7.1” was laid some time after dawn that morning, and she sat on it until mid-day. As has been common in every season, she doesn’t sit on the first egg(s) constantly until she’s done laying what she intends to lay. Temps have remained well above freezing, so her absence is no cause for alarm or concern. She perches in the nearby loblolly pines next door keeping a watchful eye, and has visited several times since then to check in on and roll the egg.
Read the full story
Watch the Season 6 Premier of the "Who & A Show LIVE!"
Posted by OKCOwlCam / Jeff Click   —   01/21/2018
Where the heck is Altera?! Is there any chance there will actually be a full Season 6?!! Let Alessondra and Jeff put your mind at ease as they explain what's going on with The Tigers based on historical fact, as well as take questions from viewers, and more! It's the first episode of Season 6's "Who & A Show", recorded live from the new Tiger Studios at The Alley at Port164 in Oklahoma City on Tuesday, January 16th.
Read the full story 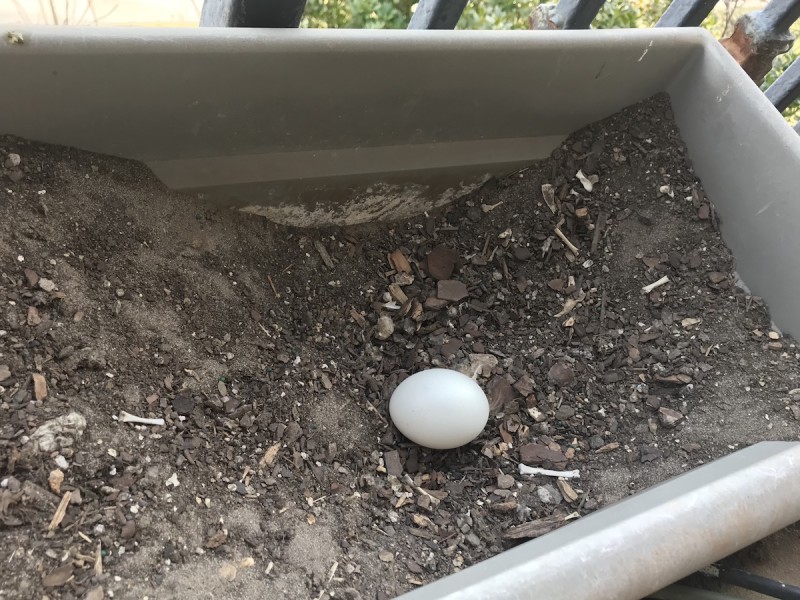 E6.1 as of Saturday Afternoon.
Tonight on Facebook Live: Altera the Unpredictable
Posted by OKCOwlCam / Jeff Click   —   01/06/2018
If Altera proved one thing last year, it's that she's definitely fit to be a mother. But she's also proven to be less predictable than the late Mrs. Tiger, having left her first egg of Season 6 for over 12 hours. What does this mean?
Read the full story 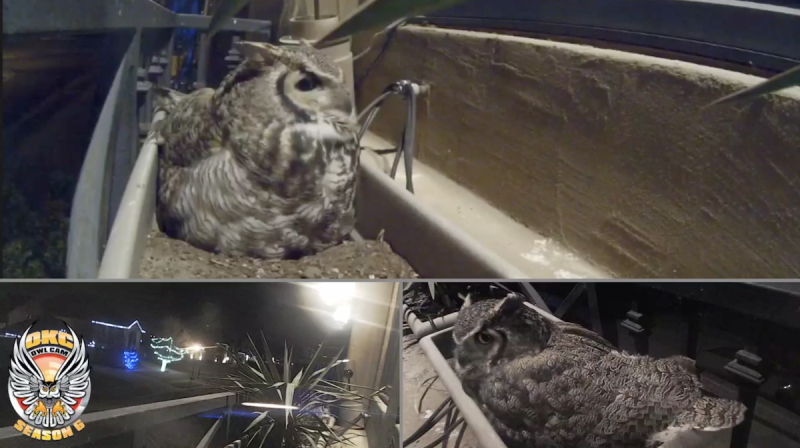 Alessondra discusses Primo's fledge, what to expect as we wind down Season 5, and takes viewer questions.

Alessondra takes questions from chatters and viewers on her 2nd episode of the new "Who & A" show.

Alessondra's first episode of her "Who & A" show, where she discusses recent nest happenings and takes questions from chatters..

We now have TWO eggs! Altera took a brief break from the nest, revealing a second egg has been laid in this new nest site. This egg shall be referred to as E5.6, as it's technically the 6th egg that's been laid during Season 5.

We have another egg!

Altera has been showing signs of pre-nesting for the past week and a half on the East ledge and has now officially nested for the second time for Season 5, this time on the east ledge. Her choice of pot is the same as Mrs. Tiger's choice for Seasons 2 - 4.

This is her 5th egg for Season 5, and will be referred to as "E5.5" (Season 5, Egg 5) until hopefully a successful hatch, at which time Alessondra will name it according to tradition.

An exact time laid has not yet been determined. If such a time isn't able to be determined by study of her behavior and vocalizations, we will consider the lay time as the first time it was visible on camera as we have in the past.

If she is to lay others, it will likely be on Friday, as both she and Mrs. Tiger have previously laid their eggs two 2 days apart. Stay tuned!

In past pre-nesting behavior, Mrs. Tiger would begin to spend extended periods of time sitting in the nest pot during her nightly visits. As those visits grew longer over the course of several nights, we would know she was about to begin laying when she would remain there after sunrise. Altera showed the same behavior last month in her first egg-laying efforts.

Fast forward to several weeks later, and we are now beginning to see Altera again take extended visits, only this time on the east ledge, which is the nest site for Season 2 - Season 4. Consequently, cameras have all been moved to this ledge to monitor her visitation. We've kept the stream live so that viewers can have an opportunity to witness their pre-nesting behavior, which is something we haven't streamed in the past.

After several days of no activity at the pot with the eggs, it is safe to say they have been abandoned and are non-viable. While this is sad news, we have seen signs that give us hope for another shot at Season 5.

Just around the corner from this nest pot is the pot chosen by the Tigers for Seasons 2-4. For the past few nights, we have seen both Mr. Tiger and Altera prepping this pot the same way they did the previous pot just before eggs were laid. Mr. T has been aggressively coaxing her to this location, bringing food and calling for her for up to a half-hour, which is unusually long for him to stay in one place. Quite a bit of digging has also been done.

Sounds being heard off-camera the past several nights are consistent with the mating vocalizations of owls, according to those who specialize in owl vocalizations. We've also been told that Altera laid eggs early enough in the season that it's not out of the question for them to "try again." We believe that is what is taking place.

Bear in mind, nothing is certain. The past 3 months have proven that as it relates to the Tiger Family and this stream. We don't aim to get your hopes up, and we acknowledge that this may lead to disappointment if nothing comes of it. Our position has always been to observe and appreciate nature's process and to give you an up-close viewing of it along with us. Consistent with that philosophy, we've placed a camera on the potentially new nest pot and have turned the stream towards that area in hopes that we all get to witness their re-courting and nest-prep process.

Watching a plastic box full of organic dirt has never been more riveting for some of us who "get it." But watch closely, as they arrive silently. And maybe, just maybe, they'll stay long enough to make something of it for us all.

It's been 24 hours since Altera left the nest. Why she hasn't returned, we can only guess. She and Mr. Tiger remained on rooftops throughout yesterday evening, all night, and through this morning. Unfortunately, she has yet to return to the eggs.

Last week, Altera laid two previous eggs. She laid on each briefly, only to leave it for an extended period of time in temperatures in the teens and twenties, causing both eggs to freeze and crack each time. Both times, though, she returned and disposed of the eggs.

While these two present eggs have not cracked, nor have they likely frozen since temps only dipped below freezing for a short period of about an hour, it is likely they are at this point non-viable.

We humans cannot always predict or fully understand nature, whether we like it or not. For those saying Altera is an unfit mother, that may be true by human standards, but the original Mrs. Tiger also had two seasons of unsuccessful eggs, abandoning both times, prior to Season 1 of the OKC Owl Cam. This is not unusual in the world of Great Horned Owls when the mother is young and inexperienced, as is suspected of Altera by our go-to GHO experts who have been tuning in.

While this is sad news, and difficult to watch, the reality is that what little time we had to watch and learn about Altera Tiger is a tremendous and surprising gift, considering just a couple of months ago we believed the days of Tiger nests, let alone at our house and on camera, would be no more.

Our philosophy at the OKC Owl Cam has always been to learn through merely observing, even when circumstances may not be ideal or easy to witness. Therefore, the stream will remain on at OKCOwlCam.com for at least the next 24 hours, or until we see a conclusion regarding our two eggs.

As we await what is likely the final views of Season 5, we ask that you'll keep an open mind about Altera, and join us in looking forward to seeing her flourish into a successful matriarch of the next several generations of Tiger clutches with Mr. Tiger, just as her beloved predecessor Mrs. Tiger did. It is our hope that we'll be back for Season 6 to see that happen.

PS - Remember, while the Facebook Live stream isn’t always streaming, you can tune in any time at OKCOwlCam.com, where you can both view the live stream and join us in chat.